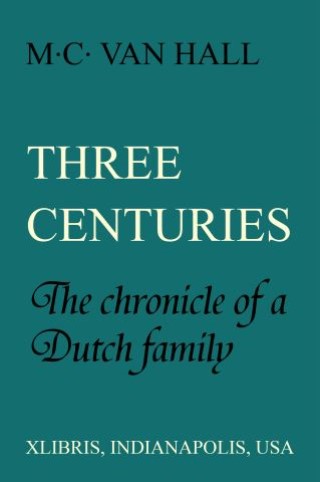 The Chronicle of a Dutch Family

Three Centuries is the captivating and once in awhile intense story about eight members of the Van Hall family, who, from father to son, narrate their experiences. It starts in 1660 around Arnhem; then Leiden and Vianen. And finally Amsterdam, where Maurits Cornelis (1768 – 1858), the patriarch of the Amsterdam Van Halls, settled in 1787.

It becomes clear to the reader why Maurits van Hall, although initially a Patriot in the battle against Napoleon, started to consider Orange as the symbol of our national unity and liberation.

This does not apply to his oldest brother Adriaan Teyler van Hall because, he with his friend Engel van de Stadt, became pirates. He stayed anti-English and anti-Orange.

A persistent legend is settled that Jan Dereck baron van Capelle was murdered by a poison letter sent to him by a high placed political opponent. Years later Government-Minister Floris van Hall was also accused of getting rid of opponents through this method, but he was never charged.

A separate chapter is devoted to the Réveil and the Separatists. Jointly with Anne Maurits Cornelis (1818 – 1844) we first meet Da Costa, Koenen, Capadose and de Clercq and later Reverend Scholte and Reverend Budding. The shameful persecution of the Separatists was forcefully denounced by Anne Maurits.

Later, in the classic liberal period, the reader is taken along to grand parties in the curve of the Herengracht. Dinners with twelve courses! This a lovely period in the history of the family. Only a few of them realized at that time that the origins of the liberal period contained the seeds of it’s dissolution and that change was coming soon.

This brings us to World War Two and Walraven van Hall (1906 – 1945), the “Oiler” and ultimately the Minister – President of the Dutch Resistance. In 2018 a movie was made about his life “Resistance Banker” available on Netflix.

There is also a chapter devoted to the city of Hattem, where in the beginning of the century the various revolutions had not yet arrived and life had the imprint of the Middle Ages.

?As is often the case, the “little” personal histories win out from the official historiography. In particular because the Van Halls are entertaining story tellers who do not take themselves all the time too seriously, although it is funny to read how they could get all excited about events, that in the framework of history was of little or no significance.